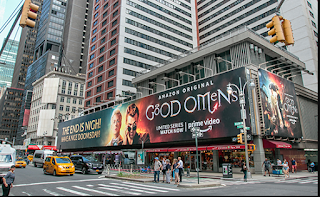 For several years now, the Shabbat candles have shimmered their earnest little lights on the dining room table, as we have gathered a few feet away in the living room to bask in the LCD glow of “Sherlock Holmes,” “Dr. Who” and “Jonathan Strange & Mr. Norrell.”

Most recently, Shabbat has meant a family viewing of “Good Omens,” Amazon’s six-part series adaptation of Neil Gaiman and Terry Pratchett’s novel of the same name. While none of our TV viewing choices (or, indeed, the choice to view TV at all on Shabbat) could be described as “Jewish,” our weekly intake of “Good Omens” seemed to be the least Jewy of all.

Centered around an odd-couple relationship between an angel and demon who attempt to avert a New Testament-style apocalypse, there are exactly no Jewish people or allusions to Judaism anywhere in the show. Even the flashback scenes involving Old Testament stories, such as the Garden of Eden or Noah’s Ark, predate Abraham, obviating the need to deal with the People of the Book. Or, for that matter, the Book. (For what it’s worth, there is also no mention of Islam, Buddhism, Hinduism or any other “isms.” Wiccans, however, get good billing.)

Despite the decidedly un-small-c-Catholic perspective of the show, I felt as drawn to these perfectly imperfect Christian archetypes as I do to Miriam Maisel.

A Jewish fan of the book posted a question on Gaiman’s blog about whether the author’s Jewish heritage informed the characters, particularly the demon Crowley, who often questions the morality of G-d’s actions.

Gaiman responded: “I think my Jewish heritage influenced how the whole of ‘Good Omens’ was written. You can’t be familiar with the midrash and also assume that anyone in the Bible has any idea what’s actually going on, after all. And Crowley is someone who asks questions.”

But I think there is something even more distinctly Jewish underlying this bit of Christian theological fan fiction. The story wouldn’t work at all if it weren’t for the relationship between Michael Sheen’s angel Aziraphale and David Tennant’s demon Crowley. The two actors play off each other brilliantly, making their character’s unlikely friendship deeply believable.

And that’s where, I think, the true Jewishness of the story comes in. The characters, who should have been sworn enemies, cling to each other as they are the only angel and demon on Earth. They have little in common with their warmongering brethren “upstairs” or “downstairs,” and they are obviously not human. So, they are the perennially wandering “others.” A tribe of two who work together to (pre-emptively) repair the world.

The Jewish fan who asked Gaiman about Judaism’s influenced thanked the author for making “it possible for me to experience a tradition that often excludes me.” To that particular fan, Gaiman’s Jewish influences made the book, and I’m assuming the show, more widely relatable.

As the series came to a satisfying, clever and (spoiler alert) non-disastrous end, I could see from the corner of my eye the wisp of smoke that rises when the last orange glow of the Shabbat candle ashes away.

Yes, Gaiman’s strong understanding of Judaism likely made the show more relatable. But, in the end, it was a strong relationship that made the show just a little bit Jewish.

Fearlessly writing the stuff other women are too smart to say out loud.
email Mayrav